Here’s What The Data Says

Government data shows that police officers tend to make street and traffic stops of all races at proportional levels. While blacks and Hispanics do have their vehicles searched disproportionally, they also get arrested for felonies at a higher rate than others.

The data also shows that black people are more likely than those of other races to be shot and killed by police, though the vast majority of fatal police shootings, across racial lines, occur when an individual is violent toward police or has a weapon and refuses to put it down.

Police Interactions With The Public-

The Bureau of Justice Statistics (BJS) has figures available on public interaction with police. The latest BJS figures are from 2011, and since they comprise the latest, most extensive data set available, it is the one being used for the purpose of this article.

The BJS data also contains statistics on what happens after an individual is stopped. The figures in the BJS dataset are all self-reported from the Police-Public Contact Survey, which is a supplement to the National Crime Victimization Survey. It surveys individuals 16 years and older. It does not use information from law enforcement departments. 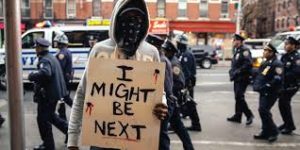 The BJS data shows 65.5 percent of ticketed drivers are white, 14 percent are Hispanic/Latino, 13.2 percent are black and 7.2 percent are either Native American, Alaska Native, Asian, Native Hawaiian, or other Pacific Islander, and persons of two or more races.

The numbers show that blacks are overrepresented when it comes to traffic stop searches. The BJS data does not include information about what happens post-search.

Of those searched by police during a traffic stop, 46.6 percent are white, 22.8 percent are black, 23.1 percent are Hispanic, and 7.4 percent are either Native American, Alaska Native, Asian, Native Hawaiian, or other Pacific Islander, and persons of two or more races.

The BJS also does not have data on individuals being searched during street stops.

The federal government makes it difficult to look at crime statistics by race, as Hispanics don’t have their own category. So The Daily Caller, for the purpose of this article, will look at local and state figures.

Since New York City, Pennsylvania, California all have crime statistics for 2014 that include Hispanic as a race, these three localities will be used for this section.

In California, Hispanics were arrested for 40.4 percent of all felonies, 34.8 of whites were, 18.8 of black people were, and 5.8 percent of “other race” were arrested were. “Other” is presumably Asian, American Indian, Native Hawaiian, and two or more races.

Hispanics were arrested for forty-two percent of violent felonies in California, 29 percent of whites were, 22.3 percent of black people were, and 6.5 percent of Asians were.

There were 5670 robberies in Pennsylvania in 2014. Sixty-six percent of those arrested for them were black, 33.4 percent were white, 8.8 percent were Hispanic, and .3 percent were Asian. 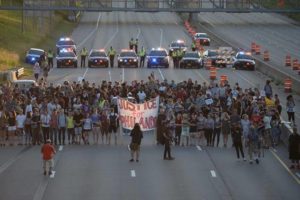 One of the main arguments behind the Black Lives Matter movement is that blacks are being slaughtered at the hands of police. The wife of Philando Castile, a Minnesota man who was shot during a traffic stop last week, said, “It’s just like we’re animals. It’s basically modern-day lynching.”

The Washington Post’s database of police shootings in 2015 will be used for the purpose of this section.

The numbers show that black people are more likely than others to be the victim of a fatal police shooting. But a deeper look at the individual incidents shows that they were not primarily of defenseless people.

Of the 990 shooting deaths, 73.7 percent were made during an “attack in progress.” This would include a shootout, charging with a knife or a physical struggle. The Washington Post also has a category called “other,” 216 total, which consists of 21.8 percent of fatal shootings.

While this includes incidents of unarmed six-year-old children getting caught in the crossfire of bullets, it also includes the shootings of people driving their cars toward police officers, which would seem more appropriately described as an “attack in progress.”

There is also a category called “undetermined,” 44 people, which includes two people who were in shootouts with police.

Of the 260 “other” and “undetermined” victims of police shootings, 212, 81.5 percent, were either brandishing a weapon, had attacked a police officers or were charging at them, were ramming, or had rammed them with a car.